In the Beginning: The Bible Stories 1997 - kissanime

In the Beginning: The Bible Stories 1997

In the Beginning: The Bible Stories is an anime television series based on The Bible’s Hebrew Scriptures created by Osamu Tezuka. The series was a coproduction between Nippon TV, Tezuka’s Tezuka Productions, and Italy’s government-owned broadcaster, Radiotelevisione Italiana. Although the series was in production during a period of several years in the late 1980s and early 1990s, it was not aired in Japan until 1997, on the satellite channel WOWOW. The series has also been aired on TV in the United States, Italy, Spain and Germany. In the Beginning marked the fourth time Bible stories formed the basis of a Japanese-animated television series, following the two Superbook series and The Flying House, which were made for Pat Robertson’s Christian Broadcasting Network by Tatsunoko Production in the early 1980s. In the Beginning features episodes devoted to most of the major Bible stories of the Old Testament, including the stories of the Creation, Cain and Abel, Noah’s Ark, Abraham and Isaac, Joseph, Moses, David, and Solomon, with the final episode featuring the birth of Jesus Christ. As with the second Superbook series, some stories were stretched out over several episodes. Unlike Superbook and The Flying House, however, no contemporary characters from modern times were inserted into the stories, save for the series mascot and viewpoint character, Roco the fox . 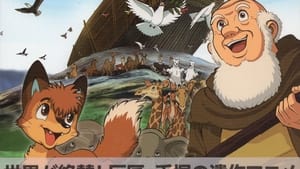